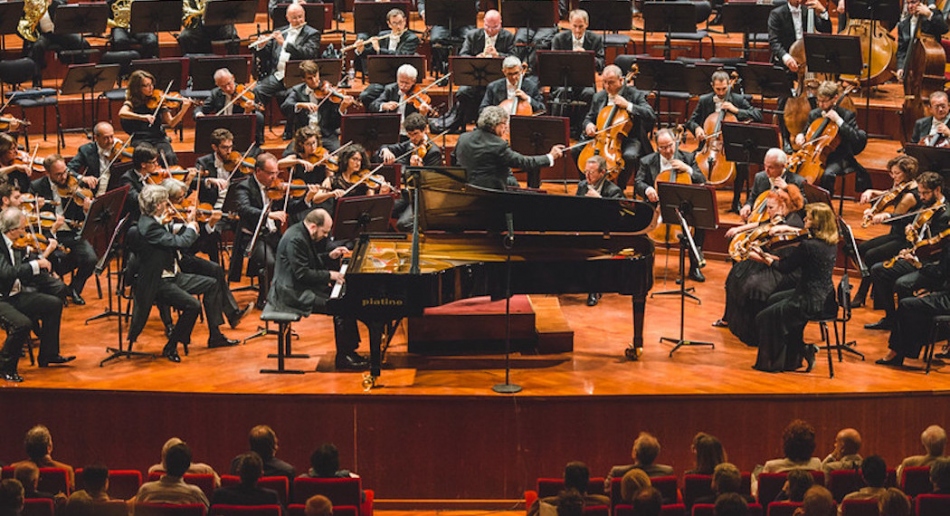 Last update: 24/08/2022
The history of the Orchestra Sinfonica Nazionale della Rai goes back to 1931 when the new public radio authority founded its first symphony orchestra in Torino, later joined by orchestras in Rome, Milan and Naples. Over the years, the various orchestras have been directed by all the major conductors of the day, from Vittorio Gui to Wilhelm Furtwängler, Herbert von Karajan, Riccardo Muti and Giuseppe Sinopoli have all made important debuts with the four orchestras. In 1994 the four orchestras were merged in Torino. The new Orchestra Sinfonica Nazionale della Rai (OSN Rai) made its official debut with Georges Prêtre and Giuseppe Sinopoli. Since then, the original members have been joined by some of the best young instrumentalists. Juraj Valčuha has been its Principal Conductor since November 2009. Jeffrey Tate was the First Guest Conductor from 1998 to 2002, when he took on the role of Honorary Conductor. From 2001 to 2007 Rafael Frühbeck de Burgos was its Principal Conductor. Gianandrea Noseda was the first Guest Conductor from 2003 to 2006. From 1996 to 2001, Eliahu Inbal was Honorary Conductor of the Orchestra. Other important figures who have conducted the OSN Rai include Carlo Maria Giulini, Wolfgang Sawallisch, Mstislav Rostropovič, Myung-Whun Chung, Riccardo Chailly, Lorin Maazel, Zubin Mehta, Yuri Ahronovich, Marek Janowski, Dmitrij Kitaenko, Aleksandr Lazarev, Valery Gergiev, Gerd Albrecht, Yutaka Sado, Mikko Franck, James Conlon and Roberto Abbado. The OSN Rai performs regular seasons in Torino, as well as spring and other special cycles, such as the highly successful cycle of Beethoven symphonies directed by Rafael Frühbeck de Burgos in June 2004. The Rai NuovaMusica project was launched in February 2004; this is a review dedicated to contemporary music, which performs new symphonic and chamber works, many of which have been commissioned specifically, making their world or Italian première. The OSN Rai often performs symphony and chamber concerts in the major cities and the most important festivals in Italy. It is a regular guest at MITO SettembreMusica and at Biennale di Venezia, and makes a number of important appearances abroad: the Orchestra has toured Japan, Germany, the United Kingdom, France, Spain, the Canary Islands, South America, Switzerland, Austria and Greece, and was invited to play at the concluding concert of the Salzburg Festival on August 26, 2006. The OSN Rai has also performed at particularly important events such as the Intergovernmental Conference of the European Union held in Torino, the concert to mark the Silver Jubilee of John Paul II's Pontificate in Piazza San Pietro in Roma, the Solidarity Concert organised with the City of Torino for the reconstruction of the Guarini Chapel, many of the concerts held to mark Italian Republic Day from 1997 to the present day, and the 2000 New Year concert in Piazza del Quirinale in Roma, all of which were televised live. Another traditional appointment is the Christmas Concert in the Basilica di San Francesco in Assisi. On September 4 and 5, 2010, the OSN Rai took part in the operatic film Rigoletto, conducted by Zubin Mehta and with the direction of Marco Bellocchio; this event was broadcasted live on RaiUno and worldwide. Similarly in 2000, the OSN Rai had been one of the stars of the television event La Traviata à Paris, conducted again by Zubin Mehta. This Rai production won the 2001 Emmy Award for the best musical show of the year and the Prix Italia as the best television programme in the show category. All the concerts of the OSN Rai are broadcast on Radio3 Rai, and many of them are recorded and televised on RaiTre. The Orchestra also has numerous recordings to its name, particularly of works by contemporary composers, and numerous live CDs and DVDs have been made of its concerts.
Torino Milano
Festival Internazionale della Musica